Bringing reality into the classroom

EDview Symposium: Save the date!

Bringing reality into the classroom

At first glance, we are not entirely sure if we have landed in some sort of alien- or sci-fi convention. In the room we are situated in, approximately 20 young people are sitting in utter silence with their bodies faced in various directions, eyes covered by what looks strikingly like blacked-out alpine goggles. However, as it turns out, this is neither a collection of aliens nor confused skiers: Welcome to the classroom of the 21st century.

As part of the initiative by Dr. Nynke de Jong of customizing students at the Faculty of Health, Medicine and Life Sciences to the reality of healthcare, on Thursday the 21st of September, she started a pilot introducing the brand-new technology. Here, the outside world was also allowed a peak into this part of education innovation. The pilot project initiated by de Jong and her colleague Dr. Silke Metzelthin, consists as a part of conventional Problem-Based Learning system, where students base their learning on solving real-life problems. In cooperation with the Living Lab in Ageing and Long-term Care (Academische Werplaats Ouderenzorg), the students «join» a homecare visit of real employees of the MeanderGroep Zuid-Limburg by watching a 360 video (a video in which all directions are recorded simultaneously) through virtual reality glasses, and thereby getting the feeling of what such a visit consist of in reality. This in turn is used as a basis for discussions in the classroom. 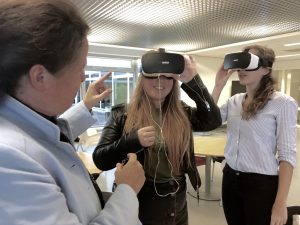 Dr. Nynke de Jong instructs student Manon Eijkenboom and EDLAB’s Valérie in how to use the virtual reality glasses

Second-year bachelor student Manon Eijkenboom from the Policy, Management and Evaluation of Health Care-programme, takes off her goggles and looks around enthusiastically. She has just finished watching a video of a home visit to an elderly lady who was in need of care, and is positive to bring such technology into classrooms.

– Normally, our program includes a lot of readings and is rather theoretical. However, by watching the 360-video, you get an understanding of what our education looks like in practice. It is also a nice change to use practical experience in addition to the theoretical aspect. I also like that by using the 360-video, you have the option to look around in the room, which makes the setting feel more natural, and that you really “are there” too.

Yet, she does not imagine the technology being a complete replacement for traditional education in the foreseeable future:

– I still think theoretical education is essential to the program as a whole, however this is a great asset. It takes us a great step closer to understanding what our reality will look like after we are done with our degrees without having to do home visits, which can sometimes be difficult to arrange.

De Jong herself is also pleased with how the reception has been amongst students. After a long day of demonstrating the use of the video in an educational context both to students, she still talks about the project with keen eagerness:

– So far, we have heard a lot of good feedback from the students, and are in the process of reviewing and evaluating the project. The idea generates from the fact that organizing home visits for students is both costly and can be challenging with regards to organization. We therefore realized that as an alternative to getting the students out in reality, we could bring reality to them. To do this, we introduce students to the practice of such visits, using technology. Here, they follow an organized scenario carried out by real health professionals and due to the technology, you get a proper feeling of being a “fly on the wall”- actually being in the room. Students also get to experience a holistic process in that they are encountered with a scenario and a patient, and throughout their course they follow up on this case.

“As an alternative to getting the students out in reality, we could bring reality to them” 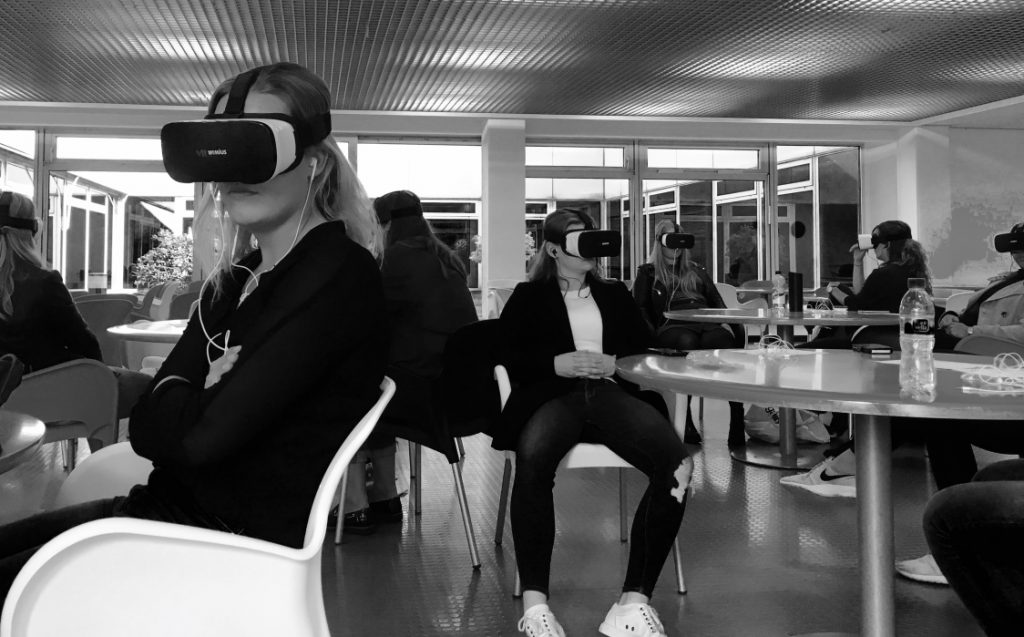 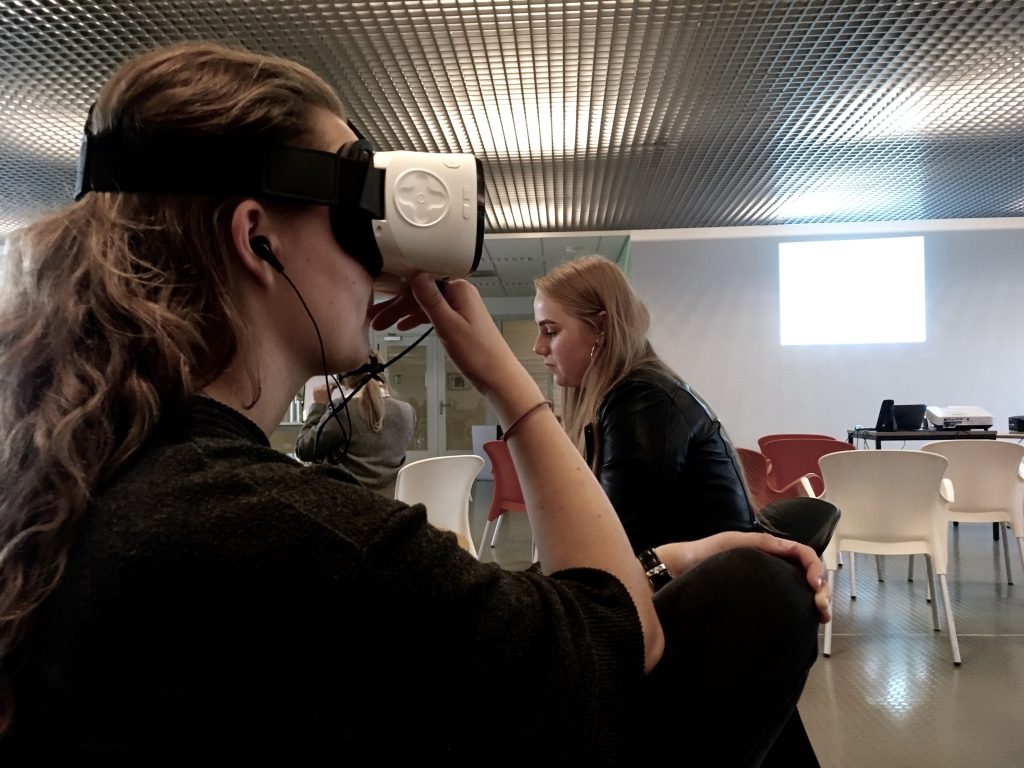 She also opens up to the possibility and emphasizes the usefulness of using the technology in other fields of academia. With regards to the current pilot, the possibility of incorporating an inter-disciplinary approach to education is also possible. The 360-video and the educational approach that originally was designed with the purpose of Health Sciences in mind, has potential to also demonstrate issues that are relevant for other study programs, such as for example in relation to studies of law and policy-making. In this sense, the technology has a multi-purpose which has potential for implementation on a UM-wide level.

Students chat happily as they exit the room, heavily gesticulating and clearly having enjoyed a different day of their studies. Whether or not this will become the future standard of the technological classroom remains to be seen, however this pilot makes sure that the UM student body remains up-to-date, even in the world of technological innovation.